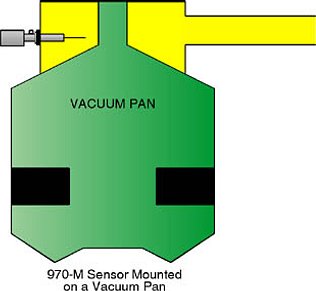 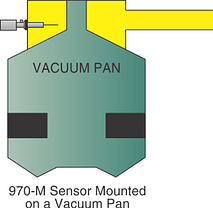 A sensitive resistance thermometer bulb in the measuring element senses vapor temperature and that reading is combined with that of a second matched bulb giving the temperature of water flashing to equilibrium at the same pressure. The two resistance values are resolved by the 970-M circuitry to produce the direct oversaturation indication and transmitted signal.

The 970-M utilizes the time-tested method of measuring temperature of vapor leaving the pan as the best indication of massecuite concentration at the upper surface. Since it is at the lowest temperature within the pan, it is at the point of highest oversaturation. This is proven as the one method capable of indicating unsafe oversaturation levels throughout the entire course of the boiling cycle.

The reliable indication of oversaturation provided by the 970-M replaces the far less reliable "feel" of even the most experienced sugar boilers. By following a few good practice rules of sugar boiling, vastly improved grain can be produced strike after strike for easy purging. This means less wash syrups and remelt sugars to be reboiled. It also means more time and pan capacity available for low grade syrup boiling to improve molasses exhaustion. See our sugar boiling articles for more info.

Please refer to our parts list for part numbers and pricing.

All prices in US Dollars and do not include applicable taxes, shipping, duties and customs fees. Please contact us for quantity discount and reseller information.

The 970-M sensor may be horizontal or slope upward for installation convenience, but a downward slope should be avoided because it would be possible for flashing water droplets to run down to the last 2" sensitive portion of the vapor bulb and cool it.

Sufficient internal clearance should be allowed to be sure that the vapor bulb will not strike any obstruction. The sensor should be positioned so that the 1" square window is on the downstream side relative to vapor flow; flashing water will then be swept away from the vapor bulb.